“I was not interested in creating a a direct simulation rather an interpretive or expressive programmatic image.” 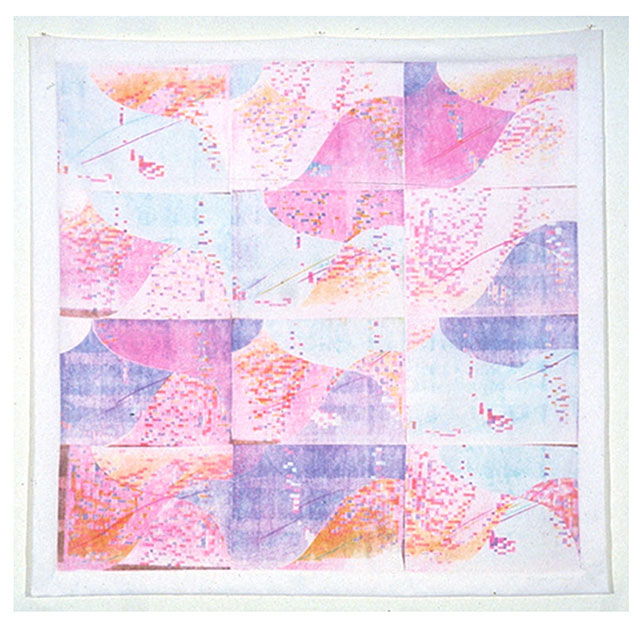 The Whitney Museum of American Art in New York City has acquired four coded algorithmic drawings created in 1975, and this digital textile created in 1979 for their Digital Art Collection. They will be included in the exhibition there titled "Programmed: Rules, Codes and Choreographies in Art 1965 - 2018".

Joan Truckenbrod is a pioneering digital media artist with works internationally represented in museum collections, exhibitions and publications. Truckenbrod is Professor Emeritus in the department of Art and Technology Studies at The School of the Art Institute of Chicago where she was on the faculty for twenty five years.

Using the Apple IIe computer and a 3M Color-in-Color copier she created fiber textiles using heat transfer color prints hand-ironed onto fabric in 1978 and 1979. The earliest of these textiles “Electronic Patchwork” is in the collection of the Block Museum of Art at Northwestern University. Her work progressed onto Textronix and Silicon Graphics computers, using 3M’s Scan-a-Mural plotters to create large seven foot by eleven foot canvas digital tapestries. She also created large color photographic transparencies as digital tapestries.

With renewed interest in Truckenbrod’s early innovative algorithmic artwork, her early artwork is represented by the Black Box Gallery in Copenhagen, Denmark, blackboxgallery.dk

Envisioning the computer as a multidimensional studio, she created one of the first courses in the computer graphics field she called Creative Computer Imaging, combining elements of visual imaging and sound with motion that resulted in Prentice Hall's 1988 publication, CREATIVE COMPUTER IMAGING.

Her current work includes the exploration of environmental issues with fiber arts and video sculpture installations. This work is presented along with installations that inspire her work, in a book by Truckenbrod titled THE PARADOXICAL OBJECT: VIDEO FILM SCULPTURE, published by Black Dog Publishers in London in 2013.

Truckenbrod's solo exhibition of her Video Sculpture can be seen on her gallery site at JoanTruckenbrod.com